Home / The Hotel / Around us 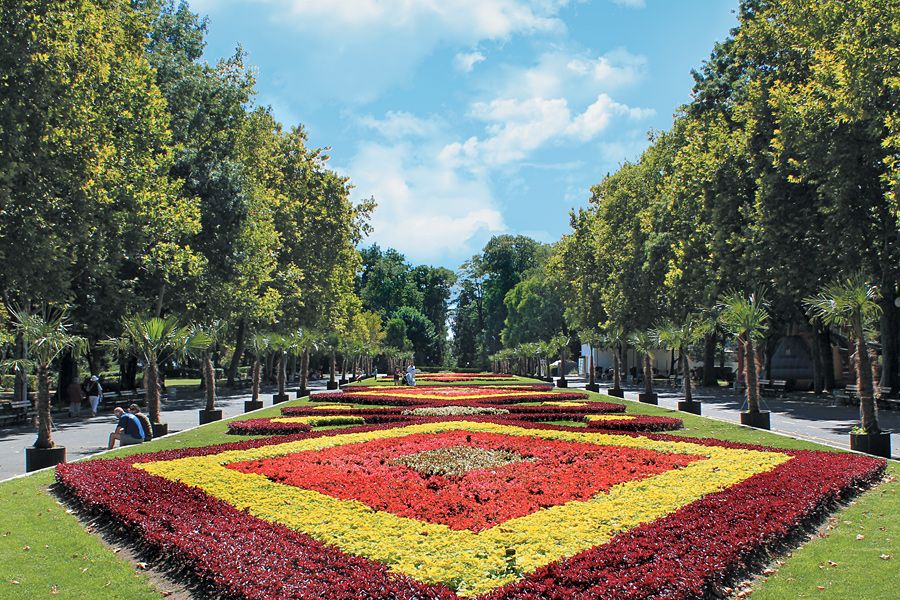 If you ask around Burgas which is the most romantic place, most of the people will tell you it’s the Seaside Park. The Seaside Park is not just a park by the seaside, it’s the heart of the city, the muse and inspiration of generations of artists, poets, and musicians; it’s been the stage of a thousand love stories…

The Seaside Park was built back in 1910 by the landscaper Georgi Duhtev who turned the bare windy space between the city and the sea into one of the most beautiful parks in Bulgaria. His passion for exotic plants brought hundreds of plant species to the park from all continents; they bring an exotic atmosphere to the park even today. The old part of the Seaside Park has been established as a monument of park art. The park spreads over 600 decres and is more than 5 kilometres long. You will need a few hours if you want to walk around it. 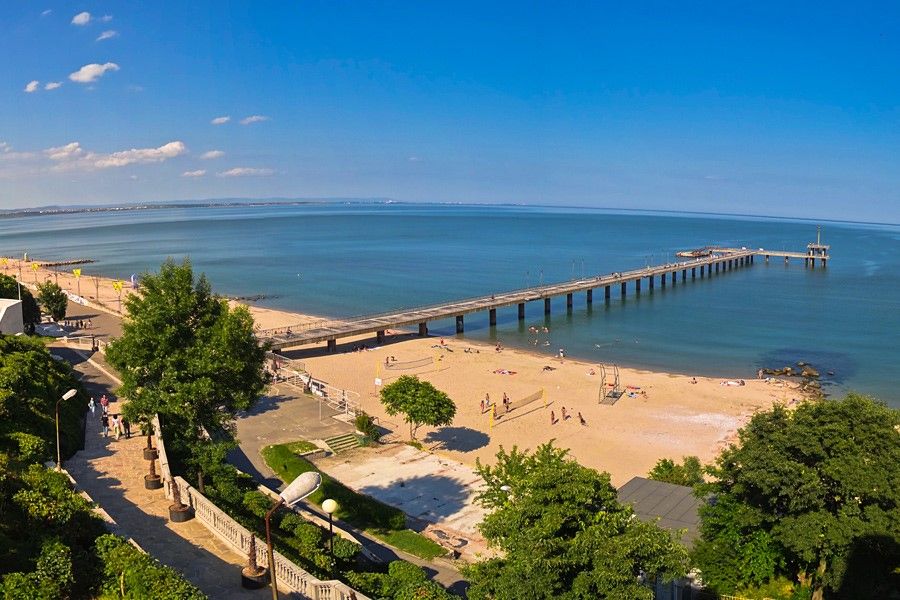 “Going to Burgas and not seeing the Pier is like going to Rome and not seeing the Pope” – this is what any local person will tell you if you ask them about the most emblematic place in Burgas and this reply will not be just empty boasting.  Almost every walk in Burgas ends in a walk along the Pier, located in the city centre. As a natural finish of the old part of the beautiful Seaside Park, going almost 300 metres into the magnificent Black Sea, one of the symbols of Burgas attracts tourists from near and far every year.

The romance of the Pier will enthral you not only with the endless sea horizon but with the lively terraces along its length, where you can see lovers embracing each other, children with dreamy eyes and old fishermen in a heated discussion about life and people and most often sea and fish.

The Pier is a place not only for walking but also for relaxing – especially in the specifically built viewing platform, which is 22 meters high and has benches which keep the memories of many first kisses and enamoured eyes, looking dreamily towards the mysterious St. Anastasia Island.

The Pier is also connected to two of the most sacred Bulgarian holidays – St. Jordan’s Day (Epiphany) and St. Nikolay’s Day. Every year, on Epiphany (6th January), there is a solemn service and following tradition, the Bishop throws the Christian cross into the sea; brave swimmers dive into the minus temperature January sea to see who will find it first. The winner, who first caught the cross, enjoys health and prosperity throughout the year. On St. Nikolay’s Day (6th December) sailors throw wreaths into the sea to commemorate perished sailors and fishermen.

Do not miss your unforgettable walk along one of the most romantic places, not only in Burgas, but in Bulgaria; take a little piece of the magic with you and the desire to come back again…

Castle "In love with the wind"

The castle in Ravadinovo or the so-called "In love with the wind" is a private castle and tourist attraction. It is located 2 km from the town of Sozopol, near the village of Ravadinovo and 32 km from Bourgas. The style of the Castle is fabulous and magical. It is built entirely of 20,000 tons of stone, which is specially extracted from the bowels of Strandzha Mountain.

What makes the Castle even more unique is that it was built in the shape of a cross - a sign of faith, love and dedication in its construction and development. The Castle "In Love with the Wind" is a unique attraction, not only for Bulgaria. It attracts with equal interest and admiration both Bulgarians and foreigners. 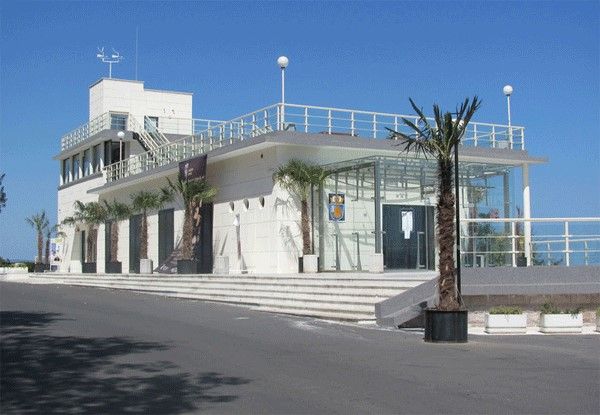 One of the most symbolic and memorable buildings in Burgas is the Sea Casino, located on the central alley of the Seaside Park. The idea for its construction dates back in 1936; there was a competition for a casino project in the Seaside Park. One of the great mayors of Burgas – Atanas Sirekov, issued the order for the competition which attracted a lot of attention. 17 projects participated in the competition. The architect Viktoria Angelova won with her project “333”. Both the project and its execution were exceptional achievements in their time due to the complexity of the design and the extreme slope of the terrain. The location was not chosen at random; it has a view of the whole bay and the building can be seen from the ships at sea and from the nearby pier. The official opening of the emblematic Burgas building was on 7 August 1938, which was witnessed by many Burgas citizens and visitors from around the country, including ministers, members of parliament and other officials. A special permit from the Minister of Transport allowed those who wish to attend the event to travel to Burgas with a 70% discount on the train. The festive opening event lasted a week and was captured for the future generations on film and camera. It takes only a short time to make the Casino a favourite place of entertainment for Burgas citizens and visitors.

The building has a few terraces and you can view the whole bay from the top one with binoculars and telescopes.

Walking along the main alley in the Seaside Park, you cannot miss the modern and beautiful building of the Summer Theatre. Throughout the summer the stage is alive with concerts, festivals and performances, which bring in thousands of visitors and citizens. A permanent part of the diverse programme of the Summer Theatre are the International Folklore Festival, the “Burgas and the Sea” National Song Contest, the “Burgas Musical Festivities – Emil Chakarov” Opera Festival and many others. Famous artists, worldwide musicians and representatives of different cultures and nationalities are part of the Summer Theatre life. 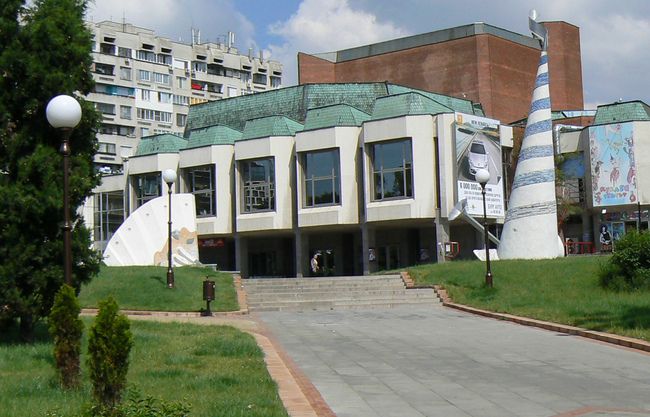 The emblematic Burgas Opera House has an extremely diverse programme which attracts every year local citizens and visitors, alike. The rich repertoire not only manages to satisfy the audience every time, but it also surprises them with new productions and attractive performances of the cast.

Many famous Bulgarian singers, known around the world, have started their carrier on the Burgas Opera stage. The ballet troupe performs regularly in the opera productions but throughout the years, it was its independent productions, such as Scheherazade, Bahchisaray Fountain, Sawn Lake, Nestinarka, The Nutcracker, etc., which marked the growth and development of the Burgas Ballet Troupe as having an original, unique and highly professional choreographic signature. 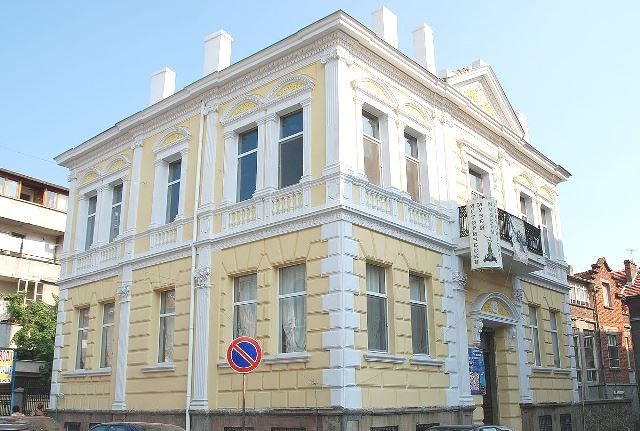 The Historical Museum of Burgas is located in a beautiful building, built in 1901. The museum exhibition presents valuable exhibits, connected with the history of Burgas and the area – National Revival icons and European fine arts, separated in independent collections.

The ground floor is organised as a crypt, which hosts original Bulgarian icons from the Tryavna School. The most interesting exhibits are the unique samples of old print books and church plates from the National Revival period.

The first floor of the museum includes a hall for visiting collections from different museums and organisations from around the country or abroad.

The third floor hosts an exhibition of European fine and applied arts from 18th-19th centuries. Here, you can find original crystal, porcelain and bronze sculptures from the classic and late baroque periods 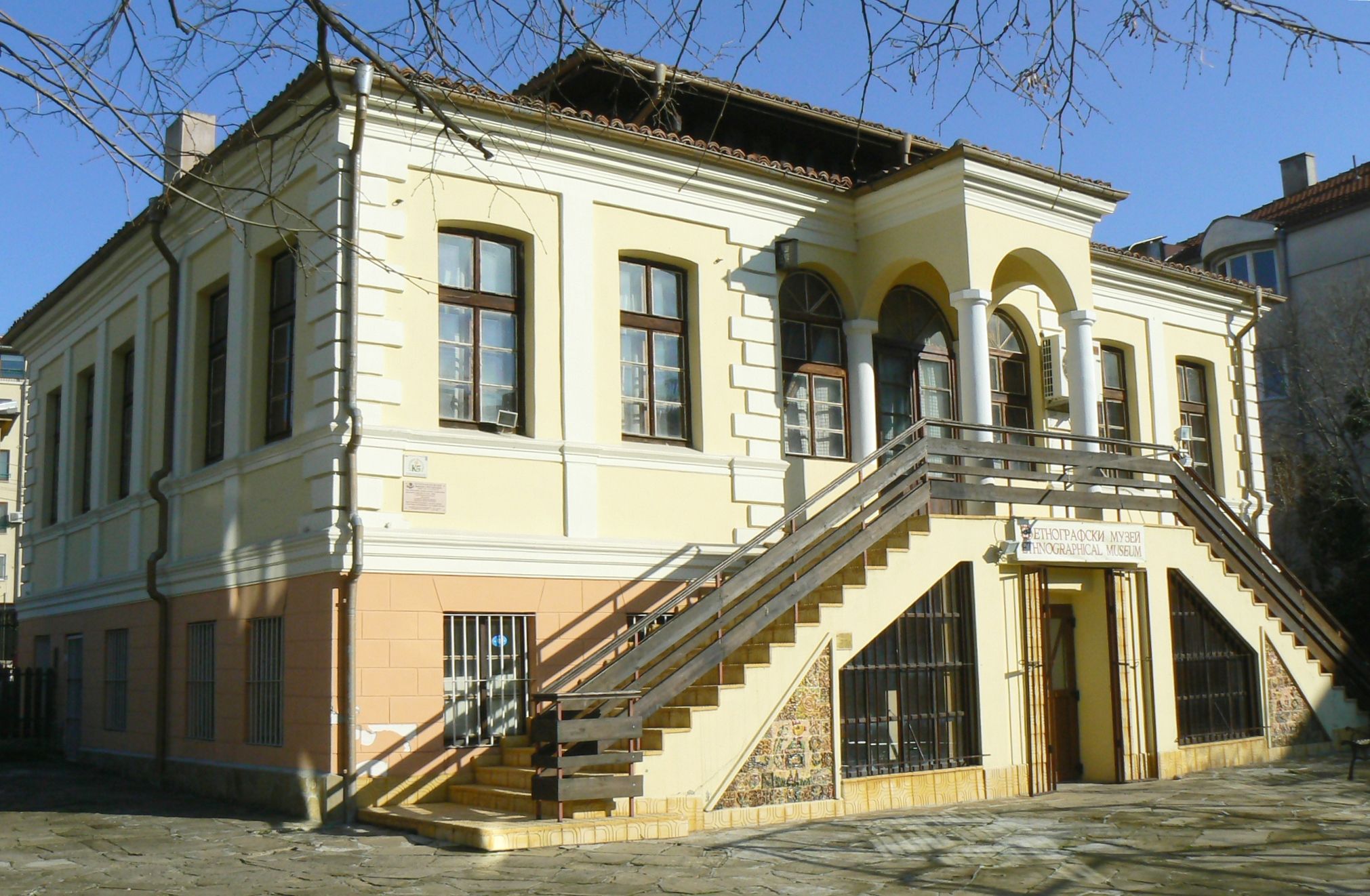 The Ethnographic Museum is located in a beautiful house dated mid-19th century, immediately next to the Cathedral Church “Saints Cyril and Methodius”. The museum showcases the traditional culture and everyday life of the old Burgas.

The permanent exhibition shows the most attractive collection of Bulgarian traditional costumes from all ethnographic groups in the Burgas area, including those of Bulgarian immigrants from present day Greece and Turkey territories. It also showcases unique ritual costumes from 19th century, connected to rite practices and folklore celebrations, typical for the Burgas area: nestinarka, kuker, Enyova bulya, lazarka, bride and groom.

“Petko Zadgorski” Art Gallery is one of the oldest galleries in the country. It’s hosted in the building of a specially reorganised synagogue. The building is an extraordinary architectural monument, built in the beginning of the previous century, by the design of the Italian architect Ricardo Toscani. The gallery is named after the great Burgas artist and sculptor Petko Zadgorski who was the first chairman of the Bulgarian Artist Company, founded in the 1960’s. The gallery stock consists of 3 000 fine arts, sculpture and graphic works of art. Some of the exhibits belonging to the Burgas Art Gallery include works of Ivan Markvichka, Bencho Obreshkov, Zlatyu Boyadzhiev, Vladimir Dimitrov-The Master, Ilia Petrov, Stoyan Venev, Mara Tsoncheva, Dechko Uzunov, Vasil Stoilov, Svetlin Rusev, Georgi Bozhilov, Dimitar Kirov, Atanas Yaranov. These are some of the Burgas artists, showcased in the gallery, from the beginning of the century until now: Gencho Mitev, Todor Karasimeonov, Yani Hristopoulis, Pavel Valkov, Georgi Baev, Stoyan Tsanev, Violeta Maslarova, Damian Zaberski, Nenko Tokmakchiev, Kiril Simeonov, Ivan Bahchevanov, Krasimir Zinin and many others, etc. “Petko Zadgorski” Gallery also hosts valuable icons from around the Strandzha area, created between 15th and 20th centuries. The collection includes the works of icon-painters Zahary Zograph, Dimitar Zograph, Yoan Zograph of Ahtopol. 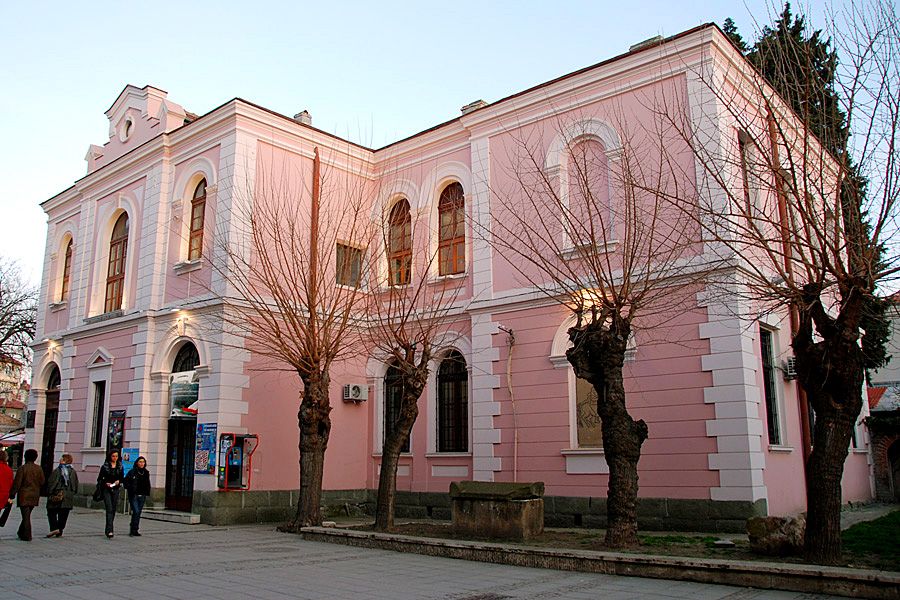 Yavorov Regional Library is the largest library in Southeastern Bulgaria with
over 120 years of history. Its fund includes over 600,000 books, sound recordings, manuscripts, original works by Burgas artists.

A few minutes away from the hotel you can immerse yourself in the world of books. 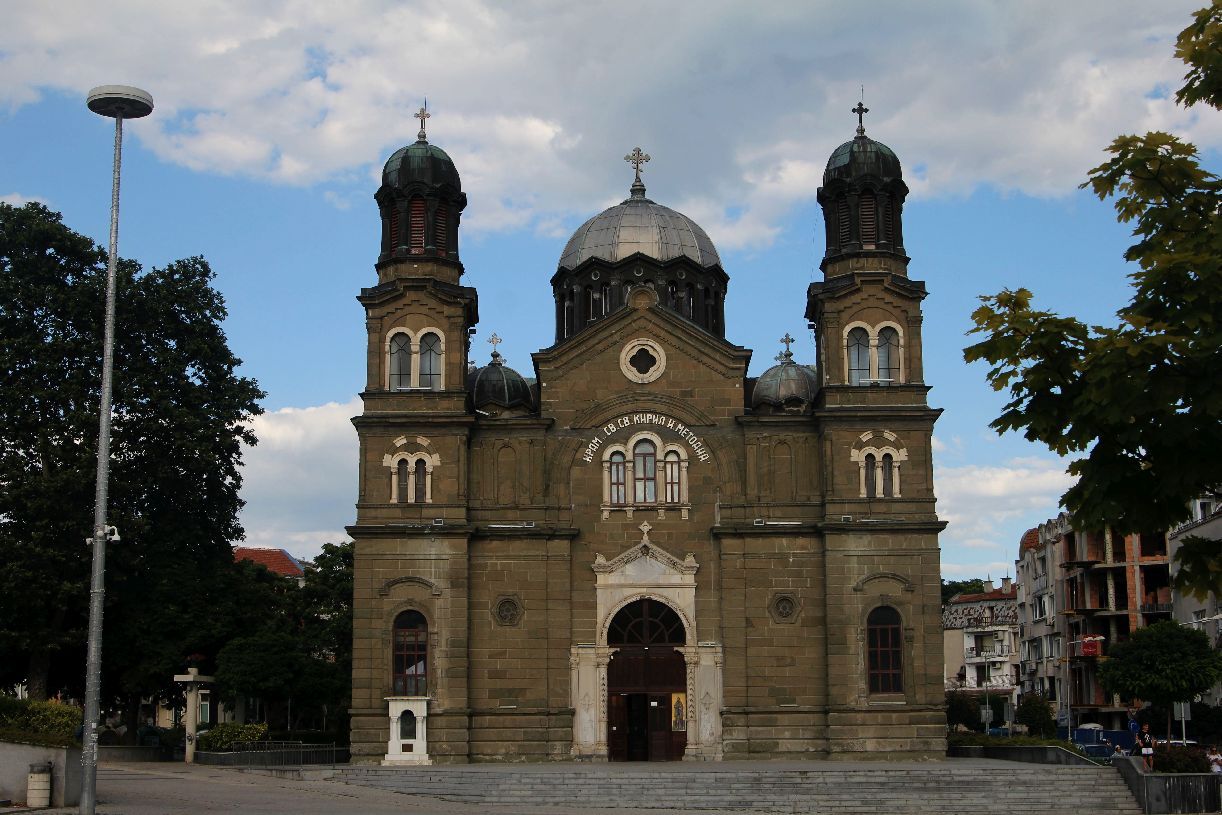 St. “Kiril and Methodii” is an Orthodox church in the city of Burgas, located 5 minutes walk from Hotel Bulgaria. 33 meters high and is located in the city center, on the square " Kiril and Methodii ", on the site of a small wooden church, which is the only exarchist temple in the city before the Liberation. It was built in the period 1897-1907 by a project of the Italian architect Ricardo Toscani, who worked in the city. 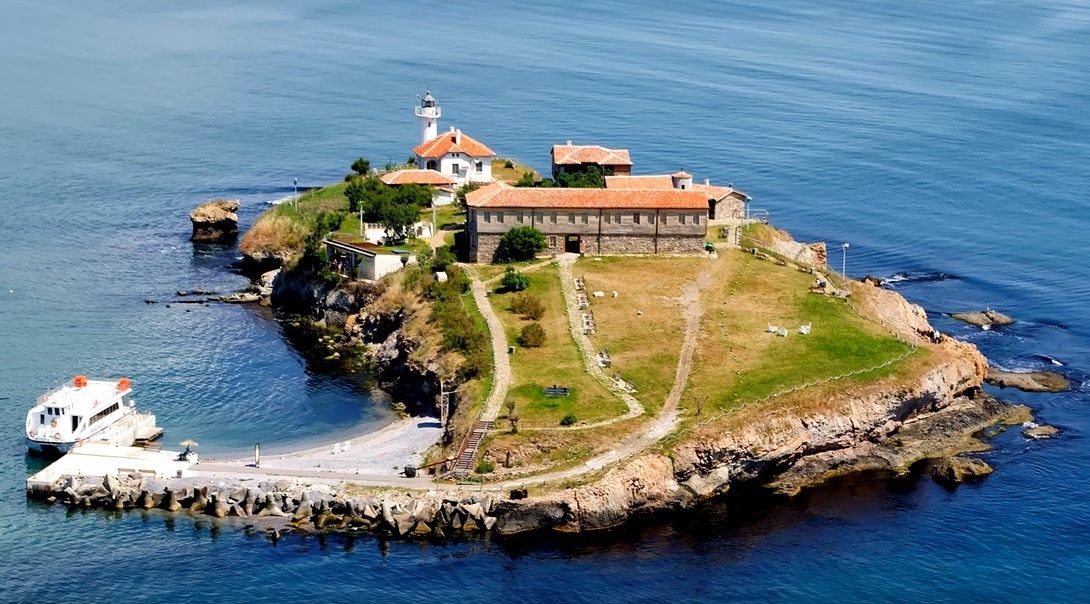 By boat to Saint Anastasia Island

One of the most attractive tourist sites in Burgas is the island of St. Anastasia. It is located seven kilometers from Bourgas between Cape Chukolya and Atia and is built of volcanic rocks. A walk on the island will offer you several opportunities. You could visit a bakery, a restaurant, a medieval monastery cell where you could spend the night.

The Municipality of Burgas provides transport to the island of St. Anastasia with the 18-meter municipal catamaran "Anastasia". 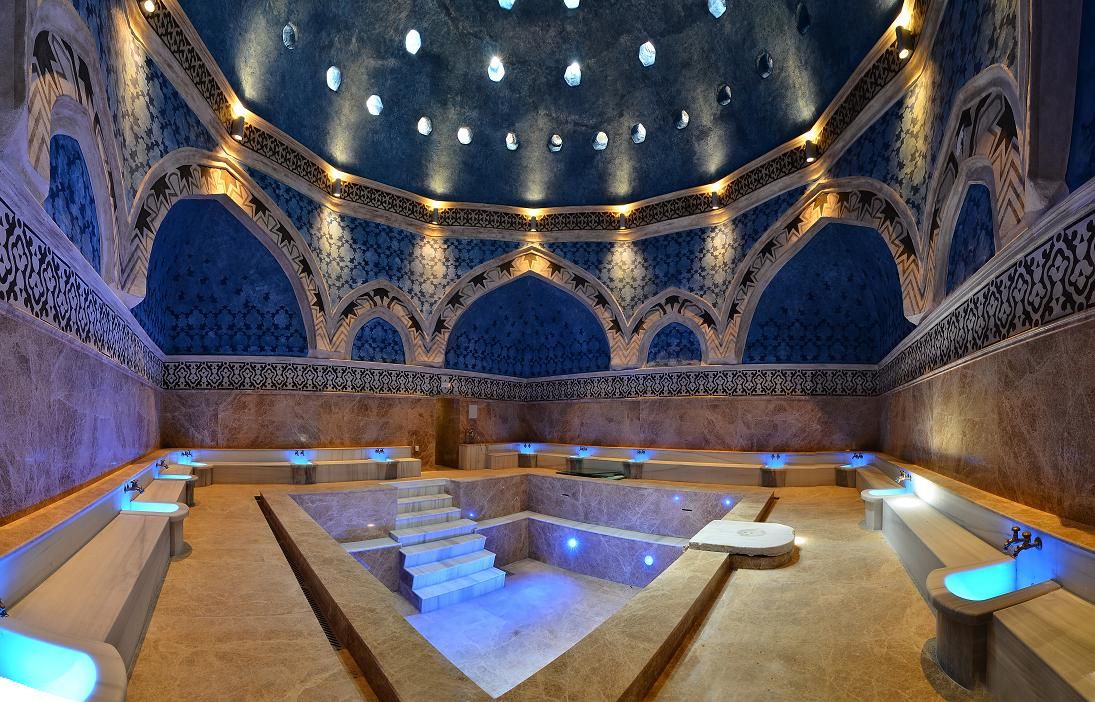 The place brings together the millennial history that attracts its visitors with a variety of opportunities for relaxation and entertainment.

The archaeological values found in Aquae Calidae are: the fortress walls of the ancient city of Terme (Thermopolis), the Roman baths of the 1st century AD. with a warm and cold pool, and various medieval rooms. They are accessible for tourists through modern footbridges constructed to facilitate the passage and viewing.

more about the hotel 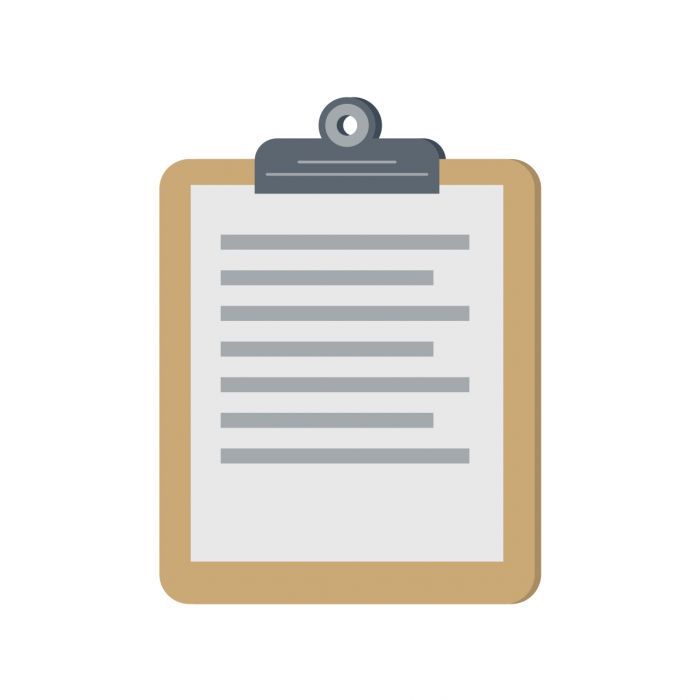 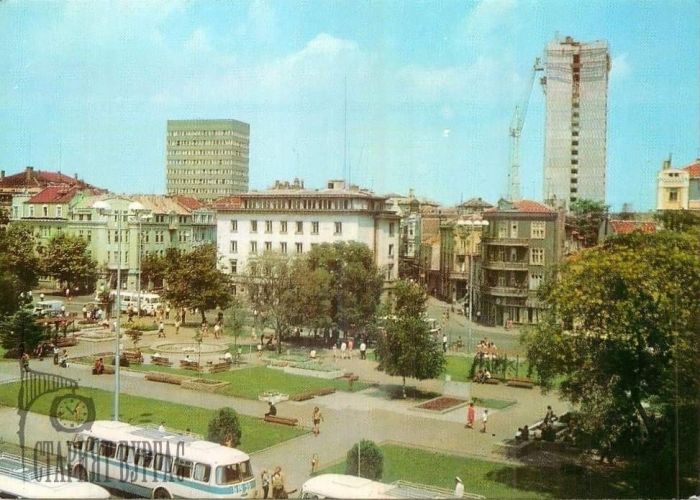